Tuesday, March 15 is known as Equal Pay Day, a public service awareness event to illustrate the gap between men’s and women’s wages. The National Committee on Pay Equity began recognizing this symbolic day in 1996, in an effort to bring awareness on how to solve wage inequity. The date of the event symbolizes how far into the year women must work to earn what men earned in the previous year. 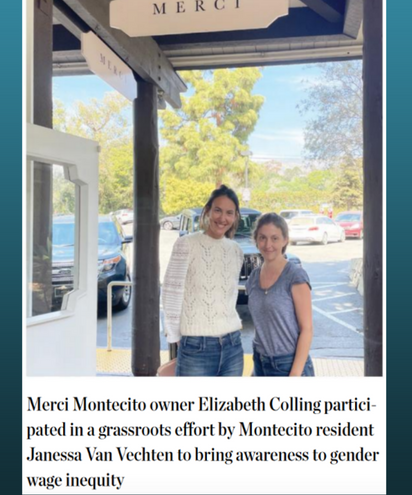 Local Montecito resident Janessa Van Vechten, a Cold Spring School mom, rallied several local businesses to get involved; the businesses donated 12% of their sales on Tuesday to Women’s Economic Ventures (WEV), a local nonprofit whose mission is to assist women in opening small businesses throughout Santa Barbara and Ventura counties. The donation amount was 12% to represent the ongoing 12% gender pay gap here in California.

“I wanted to find an inclusive way that people could get out and help raise awareness for this issue,” Van Vechten said. “Pay equity has been an issue I’m passionate about for a long time, but there are no local initiatives here in Santa Barbara or Montecito, so I decided to start my own.”

Van Vechten said the grassroots idea was born from a previous initiative many years ago, when businesses would offer a 20% discount to women on a certain day.

“Back then the wage gap was 20%,” she explained. In an effort to avoid discrimination and be inclusive to all genders, Van Vechten instead asked local businesses to donate a percentage of their sales to WEV after being inspired by the local nonprofit’s mission. “WEV is the strongest advocate of economic equality that we have here in Santa Barbara, given their unique offerings for women looking to open or expand a small business,” Van Vechten said.

Women’s Economic Ventures is dedicated to creating an equitable and just society through the economic empowerment of women. WEV is a business resource network for anyone looking to start a business, grow a local business, or improve their business skills; the nonprofit organization provides small business training, advisory services, financial literacy programs, and small business loans in Santa Barbara and Ventura counties. Since 1991, WEV has provided business training and small business advisory services to more than 20,000 people throughout Santa Barbara and Ventura counties, and has made more than $6.4 million in small business loans and helped more than 5,500 local businesses start or expand, generating an estimated $770 million in annual sales and creating nearly 12,000 local jobs. WEV is a U.S. Small Business Administration’s Women’s Business Center and Microlender, as well as a certified Community Development Financial Institution (CDFI).

While WEV’s focus is on women, it welcomes people of all gender identities into the WEV community. Business courses, programs, and loans are provided in both English and Spanish. Van Vechten says she hopes to bring awareness to this important day each year and hopes to bring on more businesses to spread the word next year.

Author
Kelly Mahan Herrick
Montecito Journal
We use cookies on our website to give you the most relevant experience by remembering your preferences and repeat visits. By clicking "Accept" you consent to the use of ALL the cookies. Read More >
Cookie SettingsAccept All
Manage consent